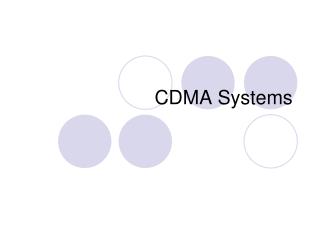 CDMA Systems. How does CDMA work?. Each bit (zero or one) is spread into N smaller pulses/chips (a series of zeros and ones). The receiver which knows the spread pattern (code) will be able to recover the original bits. CDMA - . code division multiple access . is a channel access method both data and voice are separated from signals using

CDMA TECHNOLOGY - . instrctor: nazila safavi. what this course is all about?. what is multiple access?. what is a