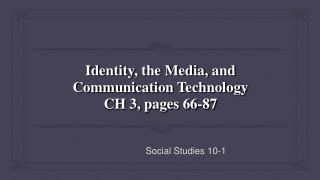 Identity and the Media - . quote of the day: benedict anderson “ modern identities are inseparable from the structures

Pages 45 to 87 - . discussion part three. i guess it’s worth having your self-esteem destroyed if there was a free toy

Media and identity - . what is an identity?. all of us have a vision of who we are. it is one of the most important