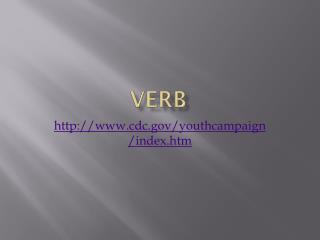 VERB. http://www.cdc.gov/youthcampaign/index.htm. Problem (2002-06). The problem in a nutshell: Childhood obesity! Some facts mentioned in the VERB Book: Only IL and MA have physical education from grades 1-12. 60% of kids do not participate in any sort of athletics away from school.

VERB - . overview. what is a verb? 2. relation of verbs with tenses. 3. assessment questions. what is happening :.

This is my daughter, Vicky Verb. - Hello! my name is gracie grammar and i’m here to introduce you to my children. they

VERB AND TENSES - . part i and part ii. verb and tenses. function: as predicate in a sentence overview: present, past,

What is a verb? - . a verb is a word which describes the action in a sentence (the doing word). examples i play football.

VERBS - . verb tenses. basic form. the plain verb indicates action that occurs in the present occurs habitually or is

Verbs - . click to add subtitle. type 1 date. what is a verb? brainstorm a definition. what’s a verb?. verbs express

Chapter 21: Verb Shifts - . verbs tell about time and when events occurs. future time : he will run to the park. past

Verbs - . kinds of verbs. a verb is a word that expresses an action or a state of being. action verbs. an action verb is

Verbs - . action verbs. who can tell me what an action verb is? a action verb tells what the subject of a sentence does

Verbs - . just do it. verb defined. a verb is a word that expresses…. an action - joey punched sal in the face. a

Verb Phrase - . verb phrase—consists of a main verb preceded by at least one helping verb (auxiliary verb). besides all