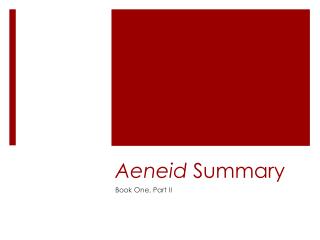 Aeneid Summary. Book One, Part II. lines 387 - 401 . Venus replies to Aeneas: The gods don’t hate you, so shut up. You’re alive and now you’re in Carthage, so go to the queen’s palace. I know that your missing comrades are alive. Vergil’s Aeneid - . an introduction. the trojans and the sack of troy. trojans king priam his sons hector and paris.