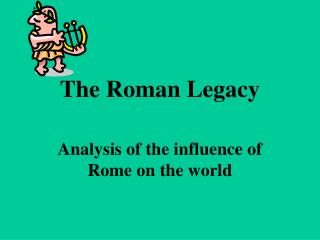 The Roman Legacy. Analysis of the influence of Rome on the world. An adaptation is . . . something, such as a device or mechanism, that is changed or changes so as to become suitable to a new or special application or situation.

The Legacy of Aristotelian Ethics - . william

S aint P eter and the V atican: The Legacy of the Popes - . map of the vatican city. important dates regarding the