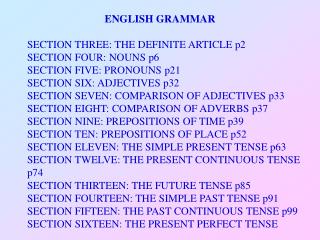 Plural of nouns - . just like in english, nouns in spanish can be either singular or plural : the book the book s

Discussion Section 5: Summarizing an Empirical Article - . what is an empirical article?. definition : a study in which

Nouns - . copy each sentence on your paper. underline the nouns in each sentence. there is more than one noun in each

Adjectives and Adverbs Review book - . you should have 8 pages in your review book. you will be using both sides of the

Possessive Nouns - . read the following sentence silently to yourself. the father of the boy asked for the help of the

Nouns &amp; Pronouns - . nouns: name a person, a place, a thing, or an idea . pronouns: takes the place of one or

“ I L ove Y ou ” ( By Martina McBride ) Grammar Focus: Adverbs - . what´s the difference between the words i n bold

Using Adjectives and Adverbs Correctly - . what are adjectives?. adjectives modify nouns or pronouns answers which? what

Nouns - By :shadai sims &amp; gregory jewette ii. nouns. what is a noun?. by definition it is a person, place, thing,