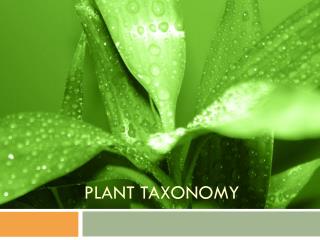 Quotes - . &quot;when written in chinese the word 'crisis' is composed of two characters. one represents danger, and

How do we classify and group plants? - . what are the major divisions? how are they grouped and classified? how do you

Bloom’s Taxonomy How will it impact in your classroom? - . eileen herteis the gwenna moss teaching &amp; learning