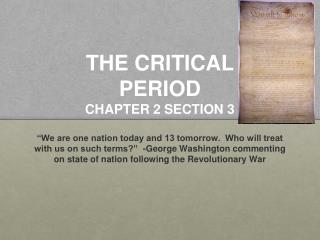 THE CRITICAL PERIOD CHAPTER 2 SECTION 3. “We are one nation today and 13 tomorrow. Who will treat with us on such terms?” -George Washington commenting on state of nation following the Revolutionary War. QUESTION OF THE DAY.

The Critical Period Section 3 - . to describe the structures of the articles of confederation to explain the weaknesses Chapter 2: Origins of American Government - . section 1: the colonial period an english political heritage. it was the

S E C T I O N 3 The Critical Period - . what were the articles of confederation? why were the 1780s a critical period in

Chapter 2 Section 3 - . the critical period. the articles of confederation. the first and second continental congresses

The Critical Period Chapter 2 ~ Section 3 - . objectives. i – describe the structure of the government set up under the

Chapter 2: Origins of American Government Section 4 - . objectives. identify the framers of the constitution and discuss