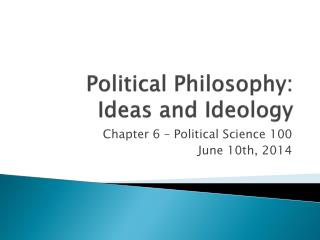 Topics in Moral and Political Philosophy - . paternalism. justifications for restricting liberty. harm principle : it is

Political Philosophy Philosophy 2B - Ray Critch Lecture 2 - The Politics of Human Nature - . in this lecture approaches

Economic, Political, and Social Philosophy - . by katherine kim period 5. auguste comte. philosopher who sought out a

Topics in Moral and Political Philosophy - . political obligation i: consent and fair play. state legitimacy and

Political Culture and Ideology - . applying the principles of the declaration of independence. major themes of the