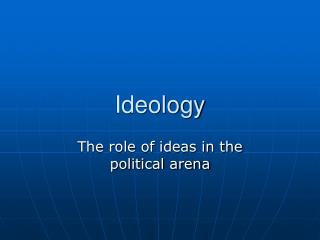 Ideology. The role of ideas in the political arena. Unit goals. In this unit, we discuss the question of systematic sets of ideas about politics, or ideologies. At the end of the unit, you should have gained four key pieces of conceptual information;

Discourse, Power, and Ideology - . (or, why we think how we do, speak how we do, and act how we do). discourse, power and

The Themes and Characteristics of Ideology - . chapter 1 (page 48-60). review. ideology: a set of principles or ideas

Introduction to Ideologies - . social studies 30-1. what type of society did you create?. will “what’s best for the