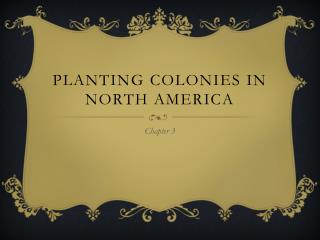 Planting Colonies In North America. Chapter 3. Important Topics. A comparison of the E uropean colonies established in North America in the 17 th century. The English and Algonquian colonial encounter in the Chesapeake

European Exploration and Colonization of North America - . colonies in north america. the spanish. the spanish explored

Colonial America - . record the prompts in your notebook and then write your response. what are some of the dangers and

Slavery in Colonial North America - . why slavery? slave societies and societies with slaves the chesapeake the low