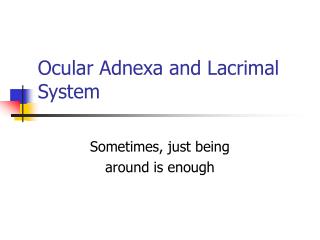 Ocular Adnexa and Lacrimal System. Sometimes, just being around is enough. Introduction. The ocular adnexa includes the structures situated in and around the eyeball This unit will consider: Eyebrows Eyelid structure Conjunctiva Lacrimal system Secretory system Drainage system.

Orbital and Ocular Anatomy - . periorbital sinuses. the eyes lie within two bony orbits, located on either side of the

Maxillofacial and Ocular Injuries - . objectives. at the conclusion of this presentation the participant will be able

The Lacrimal Structure - . the tear system is composed of: . the lacrimal gland the secretory ducts the canaliculi (tear

Anatomy and diseases of lacrimal apparatus - Lacrimal passages consist ofa) lacrimal puncta: one in each lid and situated