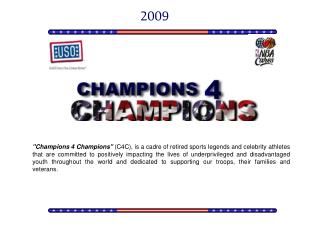 2009. "Champions 4 Champions" (C4C), is a cadre of retired sports legends and celebrity athletes that are committed to positively impacting the lives of underprivileged and disadvantaged youth throughout the world and dedicated to supporting our troops, their families and veterans. 2007 - 2009 - . the four partner countries including. slovenia, training, occupation and care centre from draga.