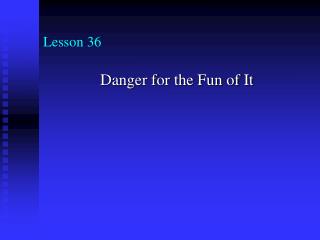 Lesson 36. Danger for the Fun of It. Risky Sports. Scuba diving Skin diving Canoeing Mountain/Rock climbing Hot air ballooning Hang gliding Bungee. Americans vs. Chinese people. Regard with the attitude toward risky sports, how are Americans different from Chinese people? And why?

Lesson 4 Introduction to ProxyGen - . overview. when you complete this lesson you should be able to: define what a proxy

Figurative Language - . idioms. in lesson 36 you will: understand what is ‘ idiom ’ . know the purpose of idioms.

Lesson #36 Arrangements, Permutations &amp; Combinations - . an arrangement is an ordered sequence of items where not

Lesson 38: Interrogatives preview - . before we begin please read pages 263-264 “grammar ” of your textbook. this

Lesson 36 “A Poison Tree” “Catacombs and Carnival” - Find your table and turn in hw to tray. lesson 36 “a

LESSON 36 CONNECTIONS - . 1. why do all people need to be redeemed? everyone has sinned and deserves eternal punishment.

Valentine Idioms - . a collection of common idioms that mention hearts. t o have a heart of gold. to be a caring person.

Welcome to my English class - . how are you?. self introduction. md kamrul hassan asistant teacher kalmakanda model govt

Lesson One: History and Definition of Leadership - 1. why is understanding the history of leadership important?. a.