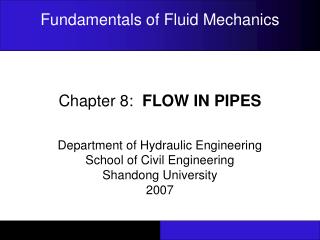 Fundamentals of Fluid Mechanics. Chapter 8: FLOW IN PIPES. Department of Hydraulic Engineering School of Civil Engineering Shandong University 200 7. Objectives. Have a deeper understanding of laminar and turbulent flow in pipes and the analysis of fully developed flow Chapter 8: Flow in Pipes - . me 331 – fluid dynamics spring 2008. objectives. have a deeper understanding of laminar

Christmas Sales Offer on Smoking Pipes by grassgoodies.com - Grassgoodis.com along with it's partner

How do organizations interact with each other? - . bus 374 dr. rajiv krishnan kozhikode. networks as pipes and prisms.

Alien Sci Fi Space ship Corridor - Pipes is one of the assets in the spaceship rooms and through out the ships corridors.

Chapter 21 Theoretical Rates in Closed-Channel Flow - . many a time did i stand such a pipe and exert myself to invent

FLOW IN A CONSTANT-AREA DUCT WITH FRICTION - . (not isentropic, but constant area, adiabatic). (short ducts/pipes;