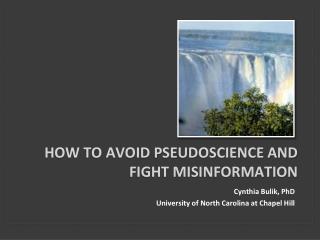 HOW TO UNDERSTAND AND FIGHT - . youth unemployment. samuel engblom swedish confederation for professional employees. how

Pseudoscience - . a belief based on evidence that does not adhere to scientific principles: replicability – can repeat

Pseudoscience - . science defined:. concept : science is limited to studying only the problems of the natural world that

Pseudoscience - . pseudoscience. an activity resembling science but based on fallacious assumptions

PLAGIARISM AND HOW TO AVOID IT - . this session what is plagiarism? why is plagiarism a bad thing? what happens to

How to Avoid Spyware - . by hottman computers &amp; consulting co www.hottmancomputers.com. what is

HOW TO AVOID PLAGIARIZING - . group member: abdulraheem zakri cai haotian xie danqing. what is plagiarism?. what is

How to Avoid Plagiarism - . what is plagiarism?. plagiarism means using another’s work without giving them credit and

PLAGIARISM and HOW TO AVOID IT - . a workshop from the writing support center . what exactly is plagiarism?.

Complications- How to Avoid and Rescue - . prof. dr. alpay Çeliker. complication is destiny of the every pediatric