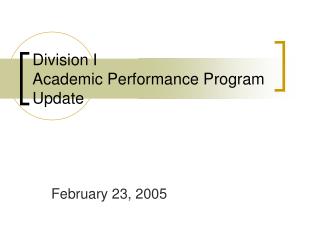 Division I Academic Governance Update - . overview. the state of graduation. holistic review of the ncaa division i

Introduction to the NCAA Division I Academic Performance Program - . rules education meeting university of louisiana at

Academic-Eligibility Requirements Division - I - . to receive an athletics scholarship and be able to compete during your

Division I Academic Initiatives: A Look Ahead - . diane dickman managing director of academic and membership affairs