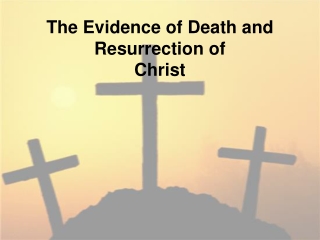 Bible Quiz On The Death And Resurrection Of Jesus Christ - . for more bible quizzes, visit www.hopefromthebible.com. as

WHAT DID THE DEATH &amp; RESURRECTION OF CHRIST MEAN? - . for the father. he gave his only son as a proof of his love

Death - 1co 15:3 for i delivered unto you first of all that which i also received, how that christ died for our sins

Major Religions Of the World - Christianity 2.1 billion followers origin- in palestine from judaism in 33 ce founded- on

The Hope of Heaven - . jesus’ resurrection = our resurrection . but christ has indeed been raised from the dead, the

THE BATTLE WITHIN - . the battle within. four important events for god’s children as a people are: the creation the

Christ’s Resurrection - . the basis of o ur assured hope. our goal this morning. 1. jesus’ resurrection was predicted

Archaeological Evidence of Jesus - . the geography stands t he test . sites and artifacts demonstrate . the life,

Connecting With God - . through faith &amp; hope. resurrection! 1 corinthians 15:12-19. what paul believes about the

Death, Burial and Resurrection - . “for i delivered unto you first of all that which i also received, how that christ

Jesus’ Resurrection and Christian Origins - . a historical argument based upon the high christology of n.t. wright. 4

This morning we look at: The importance of the resurrection as seen in Scripture. - One of the most fundamental doctrines