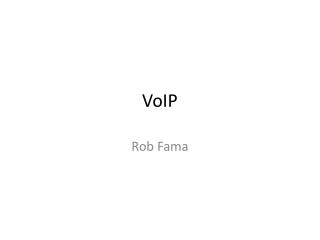 VoIP. Rob Fama. What Is VoIP?. VoIP stands for Voice Over Internet Protocol Delivers voice communications over existing internet infrastructure and protocols. Effectively VoIP is a substitution for telephone. Voice Over Internet Protocol(VoIP) - Nowadays, voice broadcasting is one of the most sophisticated means of

What is VoIP? - . voip ( v oice o ver i nternet p rotocol), sometimes referred to as internet telephony, is a method of

VOICE OVER INTERNET PROTOCOL (VOIP) - . introduction to voip. voip: a general term for a family of transmission