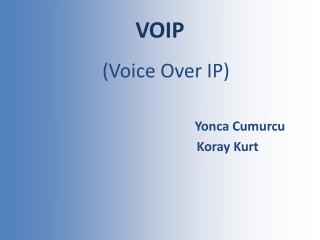 VOIP. (Voice Over IP) Yonca Cumurcu Koray Kurt. Today, we will deal with;. What is VoIP? Ways of using VoIP? What is PSTN? Which protocols are used? What are the Challanges? Advantages of the VoIP usage? Which companies produce VoIP software?

VoIP - . voice over internet protocol or “it is not voice over ip; it is everything over ip…” bob pepper, fcc.

VoIP - . { voice over ip }. what is voip?. the transportation of packets containing voice data over a network (lan,

VoIP - . voice over internet protocol. what is voip? types of voip services? how does it work? benefits &amp;