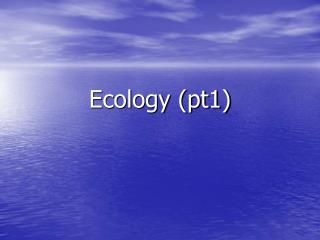 Ecology (pt1). What is Ecology?. Study of interactions among 1. Organisms (Living-Living) 2. Organisms and their environment (Living-Nonliving). Species - a group of similar organisms that can breed and produce fertile offspring. 3-2 Ecological Levels of Organization. Section 3-1.

Intro to Ecology - . biology. by completing this lesson, you will learn about…. the scope of ecology ecological

Ecological Levels of Organization - . ecologists have organized the interactions an organism takes part in different

Introduction to Ecology - . part 1 – designed &amp; edited by joe naumann. the science of ecology. goals for the

An Introduction To Ecology - . chapter 50. ecology – study of interactions between organisms and environment. consists

Ecology introduction Me 23 slides What is Ecology? - . what is ecology??. the study of interactions that take place

Intro to Ecology - . 1. what level of organization in ecology describes an individual form of life, such as a plant,

Ecology Part 1 - . standard 6 stability in an ecosystem is a balance between competing effects. vocabulary. create a

3.1 What Is Ecology? - . think about it. how is earth, in a scientific sense, a “living planet”?. studying our living

Ecological Organization Intro to Enviro Expo Part 1 - . what is ecology?. the scientific study of interactions between

Ecology Sampling Methods - . what are they?. biologists need to collect data ‘in the field” this data needs to be

Community Ecology - . community. group of populations interacting with one another within the same environment. example:

Intro to Ecology - . ecology. scientific study of the interactions between organisms and the environment interactions

Plant Ecology - . an introduction. ecology as a science. study of the relationships between living organisms and their

TOPIC : Ecology AIM : What is Ecology? - . topic : ecology aim : how do living things interact with their environment?