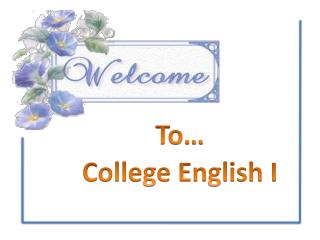 To… College English I To… College English I. A process approach to developing expository writing skills through the critical analysis of cross-disciplinary and multicultural readings. Course Description. This course provides. 1- A transition into university-level academic writing.

To… College English I

College English Integrated Course II Unit I: Ways of Learning - . i. objectives of teaching in this unit. 1. find out the

Passport to College - . “an investment in knowledge pays the best interest.” benjamin franklin. what is passport to