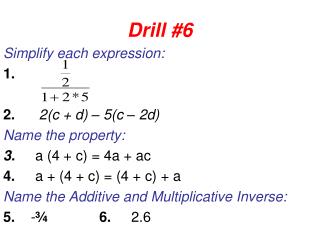 Drill and Ceremony Class - . tlo. the purpose of drill and ceremony is the proper way to maneuver an element, i.e squad

Drill The _______ side of the brain is mainly responsible for analyzing visual elements. - Monday, 9/9 objectives: how

Chapter 57 - . management of patients with burn injury. burn prevention. keep matches and lighters out of the reach of