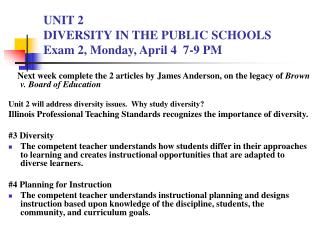 UNIT 2 DIVERSITY IN THE PUBLIC SCHOOLS Exam 2, Monday, April 4 7-9 PM. Next week complete the 2 articles by James Anderson, on the legacy of Brown v. Board of Education Unit 2 will address diversity issues. Why study diversity? Unit 7-2 Exam Questions - . directions. click the indicated icon to begin the slide show press the right arrow key on the

Unit 4-2 Exam Questions - . directions. click the indicated icon to begin the slide show press the right arrow key on the

Monday 2/4 - Grab your journal and sit in your assigned seat. begin working on your warm-up. monday 2/4. about you: write

Density Lab #4 April 2 – April 9 - . lab report must be in the correct format title and headings sections should be in

Unit 2: Cultural diversity - . speaking. warm up. ………do not spend much time preparing food. ………spend a lot of

Unit 2 : Cultural diversity - . listening. guessing game:. can you guess in which country these weddings take place?.

EDU 623 Week 2 DQ 2 Diversity in Schools - Chapters 4 and 5 of teaching today: an introduction to education explain the

Monday 4/2/12 - . get out your chemical reaction notes you have been taking and your balancing equations practice sheet.