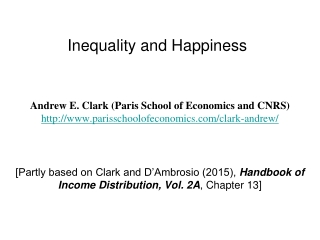 Inequality and Happiness. Andrew E. Clark (Paris School of Economics and CNRS) http://www.parisschoolofeconomics.com/clark-andrew/ [Partly based on Clark and D’Ambrosio (2015), Handbook of Income Distribution, Vol. 2A , Chapter 13].

HAPPINESS No Fear or Grieve - . by suleman imdad. happiness is emotion in which one experiences feelings ranging from

Rising Inequality Within Countries Under Globalization - . measured through the inequality in pay in manufacturing. apsa

HAPPINESS INGREDIENTS - . brought to you by motea oana olarescu ana. contents. what is happiness? ingredients of

Happiness In Marriage - . ephesians 5:22-25. happiness in marriage. last week we discussed the idea of happiness we

Happiness - . what is it?. we all desire happiness. but what does &quot;happiness&quot; mean? is happiness eating

Global Happiness - . rhonda winters hsp 406 spring 2104. what is happiness? can happiness be

Happiness - . chapter 12. happiness overview. the search for happiness is high on the list of themes in the humanities we

What We Want More Than Happiness A lecture on Subjective Well-Being and JDM - . ann marie roepke jdm 10.17.11. happiness.

Inequality - . by: angelique sarah grace micaela adrian. inequality is defined as: . 1. the

THERE IS NO WAY TO HAPPINESS. HAPPINESS IS THE WAY. THE BUDDHA - . strasser, kathleen powell, erin lim, nurulayni kline,

Project - What is your idea of happiness?. question 1:. 1.happiness is nothing more than good health and a bad memory..

Measuring Inequality - . an examination of the purpose and techniques of inequality measurement. what is inequality?.