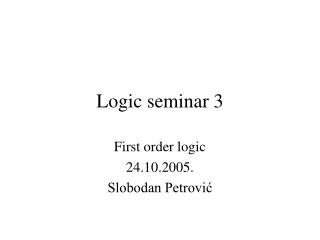 Logic seminar 3. First order logic 24.10.2005. Slobodan Petrović. First order logic. In the propositional logic, the most basic elements are atoms. Through atoms we build up formulas. We then use formulas to express various complex ideas.

IS8004 – Seminar 3 - . analysis and dissection of a qualitative is research article. did you read this article?.

3. FREGEAN LOGIC - . the rules of proof were stated already by aristotle (384-322 bc). his proposals were later developed

Logic ChAPTER 3 - . statements 3.1. a statement is a declarative sentence that can be classified as true or false but not