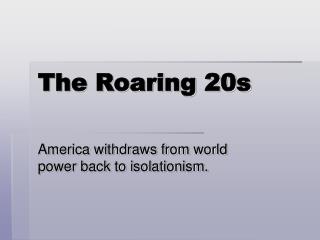 The ROARING 20s - . introduction to the roaring twenties. one of the most boisterous and rowdy decades in us

The Roaring ‘20s - . american studies. practice question. this type of speech is intended to ruin someone’s

The Roaring 20s - . the jazz age. the 1920’s were known as the jazz age and the era of prohibition. fitzgerald’s work

The Roaring 20s - . learning objective and essential question. lo: i can explain the daily life of the post-world war i

Roaring ‘20s!!!!! - . the age of normalcy the age of the flapper the jazz age. reasons it happens. end of wwi leads to

The Roaring 20s - . speakeasies. flappers. flappers. women gain right to vote in canada in 1918 remain in workforce after

The Roaring '20s - . a. the economy of the 1920's. demobilization. wwi agencies dismantled production of consumer