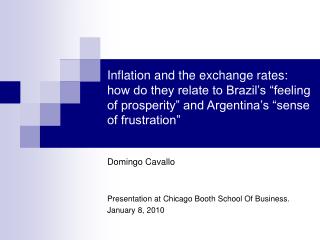 Inflation and the exchange rates: how do they relate to Brazil’s “feeling of prosperity” and Argentina’s “sense of frustration”. Presentation at Chicago Booth School Of Business. January 8, 2010. Motivation. Milton Friedman and the Chicago School of Economics - . background monetarism the chicago school milton friedman a

The BCEC and Hotels: An Overview Presentation to The Convention Partnership - . presented by milt herbert, bcmc tom

Standing on the Shoulders of Giants Great Discoveries at the University of Chicago - . a history of the university of