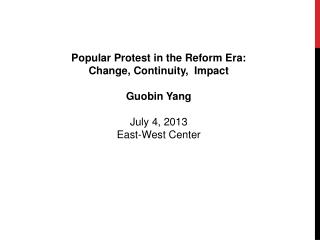 Media Change and Civic Activism: From the Cultural Revolution to the Internet Guobin Yang - July 11, 2013 east-west

Response to Intervention: The Impact of A School Reform Initiative on the Schooling of America’s Children and Youth

Change &amp; Continuity Time - . who’s gonna show in the trifecta???. the question of the question. analyze how

Secession and Civil War Change and Continuity in Texas during the Civil War and Reconstruction - . why some southern