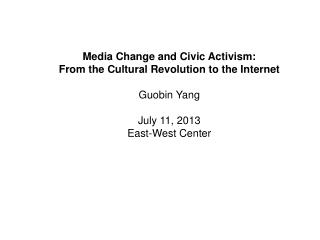 Media Change and Civic Activism: From the Cultural Revolution to the Internet Guobin Yang Media Change and Civic Activism: From the Cultural Revolution to the Internet Guobin Yang

Chapter 1: Introduction - Our goal: get “feel” and terminology more depth, detail later in course approach: use

The elderly and the media - . the elderly as a group. treated as a minority in us, western world only minority that the

Social Media 201 - . beyond the basics. what is social media?. social media are media for social interaction using highly

Chapter 16 - . culture change and globalization. what we will learn. how do cultures change? what are some obstacles to

The political economy of social media