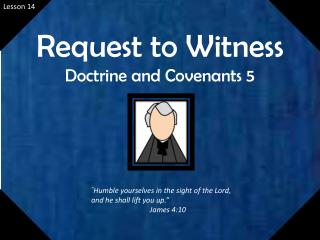 Lesson 14. Request to Witness Doctrine and Covenants 5. “ Humble  yourselves in the sight of the Lord, and he shall lift you up .” James 4:10. Seeing is Believing?.  What is something you have only heard about but would like to see with your own eyes? Why would you like to see it?. Lesson 14 - . what does god teach us about his wonderful gift of life?. why is the gift of life very important. genesis

Lesson 14 - . rafael rodriguez-ema danny rodriguez kimberly veliz. to make a decision in the legislature you need

Lesson 14 - . arjeta cosaj &amp; maya gutierrez. complicity. participation with another in the act that is or seems

Lesson # 14 - The 7 habits of highly effective teens. by sean covey. writing your mission statement. lesson # 14. why

LESSON 14 - . candidate. we can have a maximum of four candidates for the office of president. each candidate for mayor

English 10 Literature Lesson #14 Mr. Rinka - . the interlopers an analysis. setting. the time and place in which a story,