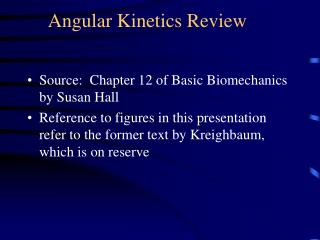 Angular Kinetics Review . Source: Chapter 12 of Basic Biomechanics by Susan Hall Reference to figures in this presentation refer to the former text by Kreighbaum, which is on reserve. Torque and Motion Relationships. Relationship between linear and angular motion Kinetics Review - . rate of reaction – decrease in concentration of reactants per unit time, or increase in

Kinetics - . chapter 12 chemistry sc5. think about it. rank in order from slowest to fastest chance of causing an

Kinetics - . the rates and mechanisms of chemical reactions. sc4. obtain, evaluate, and communicate information about how

Kinetics - . the study of reaction rates. spontaneous reactions are reactions that will happen - but we cannot tell how

Kinetics - . click to start. the rate increases with time because the acid becomes more dilute. the rate decreases with

Kinetics - . hl and sl. 6.2 collision theory. for a reaction to occur particles must collide with enough energy

Kinetics - . the study of reaction rates. spontaneous reactions are reactions that will happen - but we can’t tell how