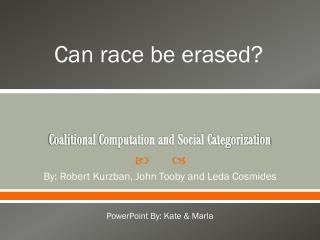 Super Grids Market: An Empirical Assessment of the Trajectory of the Market - Get pdf with technological trends at

Are you genetically programed to be racist? - . relationships of different people using mtdna. from science v298 12/20/02

“State of Urgency” Feminism Without Borders “Sisterhood, Coalition, and the Politics of Location” - . presented

Coalitional Aggression The Evolution of WAR and its cognitive foundations ~ John Tooby &amp; Leda Cosmides - By

Kurzban, Tooby &amp; Cosmides: “Can race be erased?” PNAS 2001 - . question: does the simple act of categorizing