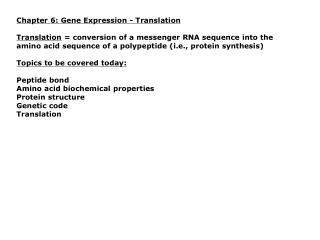 From DNA to Protein: Genotype to Phenotype - . biochemical biosynthesis pathways lead to understanding of gene-enzyme

From DNA to Protein: (Central Dogma) - . from dna to protein: genotype to phenotype. one gene, one polypeptide dna, rna,

Eukaryotic Gene Expression - . why is gene regulation more complex in eukaryotes than prokaryotes? eukaryotes have larger

Nutrition and Gene Expression Lecture, part 1, Feb 6, 2014 Overview: Gene Activation - . what is a gene? a gene is

Gene Expression - . gene: contains the recipe for a protein. 1. is a specific region of dna on a chromosome. 2. codes for

Control of Gene Expression - . chapter 16. contolling gene expression. what does that mean? regulating which genes are

Gene Expression - . honors biology. objectives. construct and revise an explanation based on evidence for how carbon,

Chapter 17: From Gene to Protein - . chapter 16 answered the question “what is the genetic material?” chapter 17