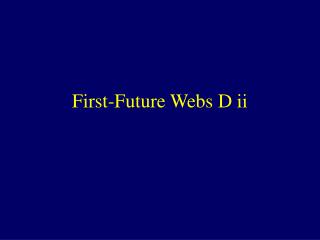 First-Future Webs D ii. Šin Arabic ﺵ Syriac ܫ Hebrew ש Phoenician W. The letter Sigma is the basis of Sin (Shin) letter 21 in Semitic Abjads and its name is linked with Samekh. SIN was the word for moon and later became linked with Shamash the sun. I. A. R. A. D. M.

Chain - F. o. o. d. chain. when we study an animal species, we learn about its anatomy, its habitat, its behaviors, its

AE2302 AIRCRAFT STRUCTURES-II - . introduction. course objective. the purpose of the course is to teach the principles of

Drink or Dump– the choice is yours A Web Quest based on the Boston Tea Party - . katie van gilst edci 5314.

Webs of Narrative - . the nature of narrative. help. what is narrative?. from a technical viewpoint, narrative is a

Environmental Science: Toward a Sustainable Future Richard T. Wright - . chapter 2. ecosystems: what they are ppt by

AE2302 AIRCRAFT STRUCTURES-II - . introduction. course objective. the purpose of the course is to teach the principles of

Theories of European Integration II - . federalism vs. functionalism and beyond…. explaining theories and strategies of

The Future of TV - Table19's fresh thinking session on the future of tv. discussing 5 key