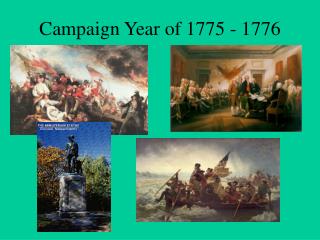 Campaign Year of 1777 - . “the year of the hangman”. the three-pronged campaign. general john burgoyne. col. barry

The year 1776 produced some great new ideas - The wealth and poverty of nations:  what have we learned since adam smith?

1775-1815 - . a terrible time. the thirteen colonies of the united states. were british colonies in north america.

The Declaration of Independence 1776 - We hold these truths to be self-evident, that all men are created equal, that they

-Immanuel Kant, 1775 - “in law a man is guilty when he violates the rights of another. in ethics he is guilty if he

FOREIGN GOLD COINS OF 1776 - . part i- coins and weight tables by xavier pique. purpose- part i look at gold coins