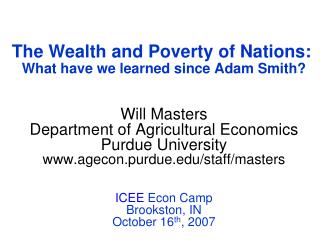 The Wealth and Poverty of Nations:  What have we learned since Adam Smith? Will Masters Department of Agricultural Economics Purdue University www.agecon.purdue.edu/staff/masters ICEE Econ Camp Brookston, IN October 16 th , 2007. The year 1776 produced some great new ideas.

Battle at Moores Creek Bridge February 27, 1776 - . a history of events leading up to, during, and after the battle at

The Road to Revolution - . how the colonists and the british government fell into opposition. the major disputes. cost of

Moving Toward Independence - . eq: why did the colonists draft a “declaration of independence”?. what new issues