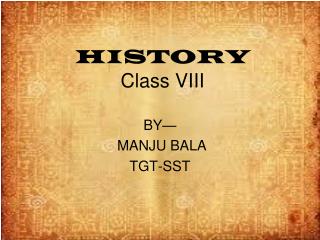 HISTORY Class VIII. BY— MANJU BALA TGT-SST. From Trade To Territory. The Company Establishes Power. Aurangzeb was the last of powerful Mughal rulers. He was followed by a succession of weak rulers after his death in 1707. Thus the empire broke up under various zamindars and subadars. Mrs. Riedner’s History Class - . homework &amp; grades. homework is expected to be turned in on time . no late

Roman History: Class System - . roman slaves. the slaves were the lowest in the class system. they had no rights and were

Rock and Roll History VIII - . bring on the noise. different

Mrs. Hutton’s History Class - . rules and expectations. rules. be safe be respectful be responsible be a learner. lhs