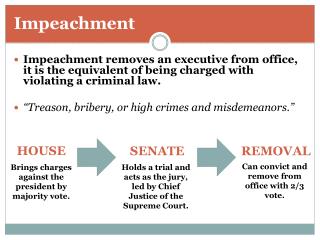 Impeachment. Impeachment removes an executive from office, it is the equivalent of being charged with violating a criminal law. “Treason, bribery, or high crimes and misdemeanors.”. HOUSE. SENATE. REMOVAL. Can convict and remove from office with 2/3 vote.

The Impeachment of Andrew Johnson 1868 - . you decide. background information. as a leading war democrat and pro-union

Impeachment of Bill Clinton - . by kylie shook and beth hess. when. bill clinton was impeached by the house of

What is impeachment? - . do now: what do you think the legal definition of impeachment is? answer: process of destroying

Chapter 9: The Executive Branch - . chapter links. section 1 “the roles of the president”. section 2 “the

The Civil War Amendments and The Impeachment of Andrew Johnson - Reconstruction and the failures of a president. the

Impeachment - . constitution outlines the way to remove officials from office when they have failed at their job-

Johnson Impeachment… - . bell work: what would it take for you to remove a president from power?. balance of power.

Impeachment - . what can cause a president to be impeached?. can only happen for high crimes and misdemeanors: 1.

Congress v. The President - . dom,dom,dooooom. congress vs. president. since 1930, the executive branch has often seemed

CH 11.4 Nonlegislative Powers of Congress - . constitutional amendments. congress has the power to propose amendments to

Chapter 8 The Presidency - Natural-born citizen, 35 years old, and a resident of the us for at least 14 years. 4 year

Impeachment of the President - . what is impeachment?. it is a process authorized by the constitution, to bring charges