Having Faith in the Lord Jesus Christ - PowerPoint PPT Presentation 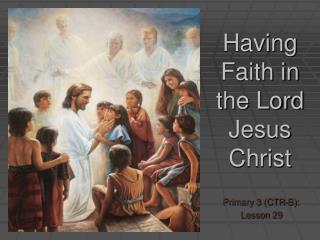 Having Faith in the Lord Jesus Christ

Having Faith in the Lord Jesus Christ. Primary 3 (CTR-B): Lesson 29. Sharing Time!. Let’s take 1 minute each to share something fun that you did last week. Remember to reverently listen to others as they share. . You can ask questions when they are done. We Can Have Faith in Jesus Christ.

Having Faith in the Lord Jesus Christ

Westminster Confession of Faith - . chapter 8. of christ the mediator – section

Call upon the name of the Lord Have faith in His name Jesus is the name we adore - Let's all just call. t r u t h

Romans 5:1-2 - . therefore , having been justified by faith, we have peace with god through our lord jesus christ, 2

GOT FAITH? - . what is faith?. dictionary.com : confidence or trust in a person or thing :belief that is not based on

SALVATION BY FAITH ONLY? - . salvation by faith only?. bible chapel, statement of faith we believe that forgiveness of

The Epistle of James - . lesson 1 introduction and “the testing of your faith” james 1:1-11. introduction. written by

Indestructible Foundations: Jesus Christ is the Son of God - . jn. 5:16-19. jesus. w e have established that jesus was a

The Hope of Salvation - . if you declare with your mouth, “jesus is lord,” and believe in your heart that god raised

The Deity of Jesus Christ - . jesus is god. jesus pre-existed his physical birth: jesus created the universe in gen 1:1

CATHOLIC LIFE IN THE SPIRIT SEMINAR - . catholic- means universal it pertains to our lord jesus christ the universal one

Jesus Christ Is Lord - . jesus is lord over all!. acts 2:33 &quot;therefore being exalted to the right hand of god ,

PRAYING WITH FAITH - . encouragement to pray with faith critics abound who disparage christians from praying: • “god