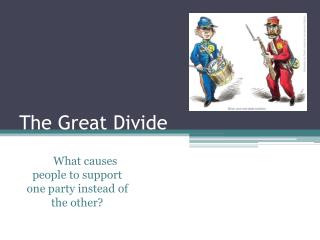 The Great Divide. What causes people to support one party instead of the other?. I. Demographic Characteristics. A. Race. Single Best Predictor for Most Racial Minorities The Great Divide - . what causes people to support one party instead of the other?. i. demographic characteristics. a.

The Great Divide - . addressing some of the boundary issues between service systems. sue brown the northcott society.

The Great Divide - Mitosis:. the great divide. “mitosis in a nutshell”. to be answered…. think: how many cells

The Great (gym) Divide - . curricula by design #3 m. fischer. the great (gym) divide cont’d. the title refers to the

Across the Great Divide: - Building bridges for cross-generational management in libraries emily a. hicks 2008 nc serials

The Great Continental Divide - . at the crossroads. scriptures to consider:. i kings 18:21 : “ and elijah came unto all

America’s Great Divide - . or. one nation under the united nations. agenda21today.com. 2. global governance or

1950s Music – The Great Divide - . music appreciation. compare the music. in the 1950s, many parents and people of the

Great Powers Divide China - . question 1. besides the chinese dragon, what nations attacking the dragon are shown and

SCIENCE AND RELIGION: HOW GREAT IS THE DIVIDE? - . warfare thesis : throughout history, religion and science have been