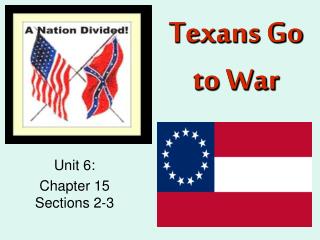 Texans Go to War. Unit 6: Chapter 15 Sections 2-3. In its declaration of secession, Texas stated that it intended to go to war to preserve a southern way of life that made racial distinctions, in part, by maintaining blacks in a condition of servitude. . Civil War Begins.