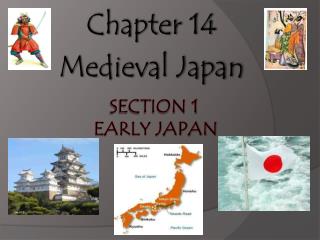 Chapter 14 Medieval Japan. Section 1 Early Japan. I. Japan’s Geography (pg. 485). Japan is a chain of islands that stretches north to south in the northern Pacific Ocean Although Japan’s islands number more than 3,000, many of tiny and most Japanese live on the four largest islands: