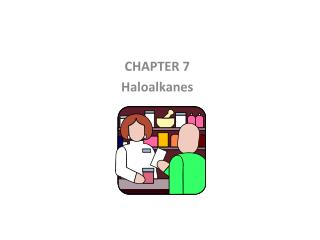 CHAPTER 7 Haloalkanes. Haloalkane (alkyl halide): a compound containing a halogen covalently bonded to an sp 3 hybridized carbon; given the symbol RX. Haloalkanes. An alkane in which one or more H atoms is replaced with a halogen (F, Cl , Br, or I) CH 3 Br 1-bromomethane