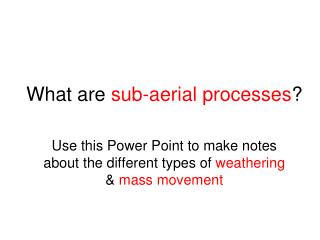 What are sub-aerial processes ? What are sub-aerial processes ?

Earth’s Sub-Surface Processes - . continental drift. the process by which the continents move slowly across earth’s

What Makes an Effective PowerPoint Presentation? - . avoid using powerpoint as a