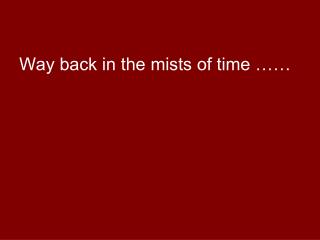 Way back in the mists of time ……. The Fall of Angels www.abcgallery.com/R/rubens/rubens106.html. Common Themes?. Striving for understanding Thirst for Knowledge Quest for Truth Guilt Desire Control. The Devil and the Angels. Christian, Hebrew and Islamic tradition Erdogan's Turkey - Ahead of sunday's referendum on broadening president tayyip erdogan's powers, a look back at the

over the river - . after the game. take a little. just the same. it’s only me. think before you act. live and play. try

To go back. - To go back. at any time, you may press the â€œ esc â€ button at the top upper left side of your

Back to Basics - . f. markovich 2005. purpose. find that students either don’t know some of the basics or have

Jesus is Alive! - The hope of the resurrection what is easter? a time to buy new clothes? a time to paint easter eggs? a