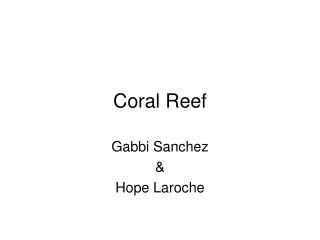 Case Study of the ArcGIS Marine Data Model: Examining Habitat Utilization Patterns of Reef Fish Along the West Coast of

AQUARIA - How to set up fresh and salt water aquariums an aquarium biotic (living ) type of fish, newt, turtle etc.

Chapter 32 - . an introduction to animal diversity. overview: welcome to your kingdom. the animal kingdom extends far

At Home in the Coral Reef - . unit 4 week 5. vocabulary. coral: a group of small animal skeletons that forms a reef.