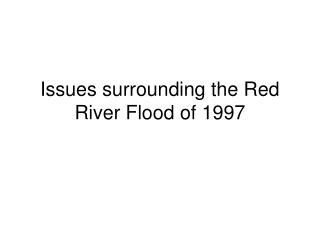 The Red River Resistance - . louis riel and the metis . riel. hero? traitor? you will be able to form your own

Fales River Flood Modeling - . brett andrews. purpose. the purpose of this project is to analyze historic flood data and

The 2010-2011 Missouri River Flood: - An experimental rapid assessment of weather and climate conditions leading to high