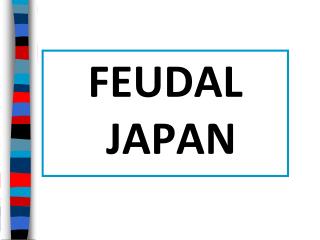 FEUDAL JAPAN. Essential Question : What were the characteristics and causes of Japanese feudalism?. PART I: EARLY DEVELOPMENT OF JAPAN. Geography of Japan. Japan is part of the continent of Asia ; Japan is a series of islands near the coasts of Korea and China .

Feudal Japan: The Tokugawa &amp; Samurai - . global history i: spiconardi. the samurai. bushido  the way of the

Japan’s Feudal Age - . japanese feudalism emerges. due to a struggle for power within armies-a feudal system in japan

Feudal Japanese Society - . historians believe that three factors led to the rise of feudalism in japan during the

Japan’s Feudal Age - . world history ms. costas. japan falls into a time of trouble. towards the end of the heian