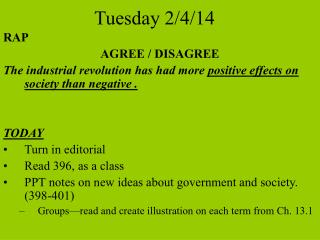 Tuesday 2/4/14. RAP AGREE / DISAGREE The industrial revolution has had more positive effects on society than negative . TODAY Turn in editorial Read 396, as a class PPT notes on new ideas about government and society. (398-401) 2/25/14 Happy Tuesday - Do now: glue in all pages of poetry packet into your notebook. and…. new seats! objective :

Tuesday, January 14 - . open agenda to today’s date. write quote in composition book. “there is nothing insignificant

Tuesday 9/16/14 - . learning target: know how to use and convert numbers into scientific notation. learning outcome: i

Terrific Tuesday, Oct. 14 - . get your notebook if you turned it into me yesterday take your seat begin precious time